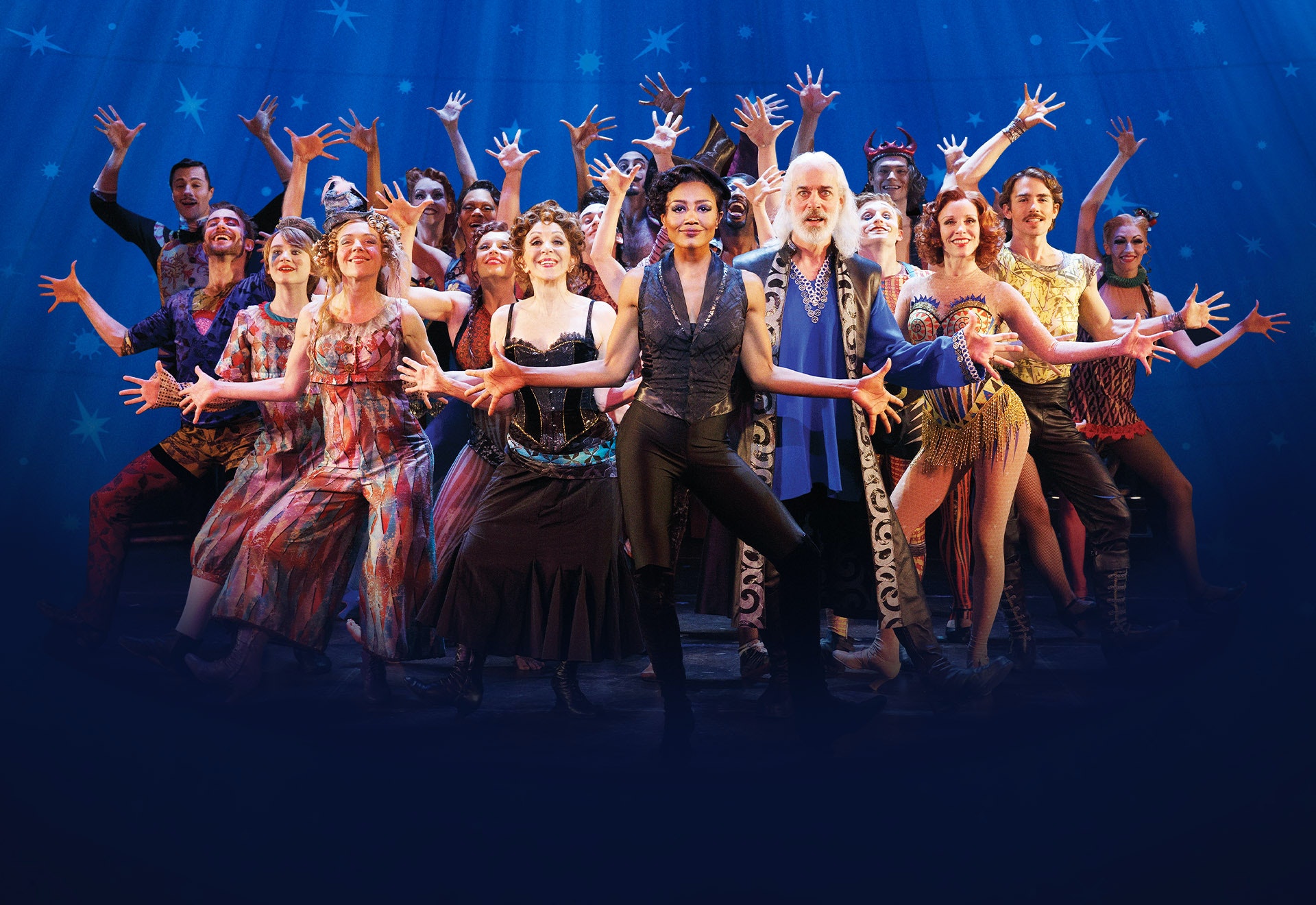 Full of extraordinary acrobatics, wondrous magical feats and soaring songs from Stephen Schwartz (the composer of WICKED and GODSPELL), PIPPIN has been lovingly crafted to become Broadway’s high-flying, death-defying musical. This unforgettable new production is the winner of four Tony Awards including Best Musical Revival and was hailed as “Astonishing. A PIPPIN for the 21st century. Dazzling and awe-inspiring.” by Ben Brantley of The New York Times.

PIPPIN tells the story of a young man at a crossroads in his life. Does he follow in the footsteps of his father, one of the most powerful men in the land? Or does he strike out on his own, to find his own ‘corner of the sky?’ PIPPIN is a play within a play. The story is told by a travelling troupe of actors and acrobats (called ‘Players’), directed by the mysterious Leading Player. Like a vaudeville act, the Players both act out the roles of the story and speak directly to the audience.

This award-winning production features many Broadway standards including “Corner of the Sky”, “Magic To Do”, “Glory”, “No Time At All”, “Morning Glow” and “Love Song”.

Join us... for a magical, unforgettable new PIPPIN.

When we reopen, the Sydney Lyric will operate in accordance with its Covid Safety Plan with the goal of ensuring that your experience at the theatre is made as safe as reasonably possible and in compliance with the recommendations of NSW Health that apply at the time. The plan encompasses health and hygiene protocols developed by the theatre industry led by Live Performance Australia. The Covid Safe Plan applicable at the time of your visit will be made available on our website.

We know things can change, so in the event that you can no longer attend the performance of PIPPIN on your chosen date, we have implemented processes to provide a stress free exchange experience. Tickets can be easily exchanged up to 72 hours before your scheduled performance date, simply by sending your request to Ticketmaster Customer Service.

Terms and conditions below:
1. Exchange must be completed a minimum of 72hrs before your scheduled date.
2. To exchange tickets, email your request to Ticketmaster Customer Service.
3. Tickets can be exchanged into “like for like” performances of PIPPIN at the Sydney Lyric Theatre, eg: Wednesday evening into another Wednesday evening etc. If your preference is to attend on a different day/time of the week additional fees may apply.
4. Exchanges are subject to seating availability for your chosen date/time.
5. A partial refund may be available if the face value of the original ticket is higher than the face value of the new ticket.
6. New special offers are not valid for exchanged tickets.
7. Ticket exchange is only available for tickets purchased through the official Ticketmaster website.
8. Not valid for complimentary tickets or tickets purchased via a “Re-Sell Site”.
9. All tickets are non refundable. If however, your performance of PIPPIN is cancelled or rescheduled, you will be offered the option to receive a refund or transfer your tickets into a new performance time.
10. Other restrictions may apply.

11. COVID-19: If you have tested positive for COVID-19 or are waiting for a test result and are required to isolate, please contact us at Ticketmaster Customer Service and we will exchange your tickets for a future performance. If a suitable performance cannot be found then you are eligible for a full refund. If you have cold or flu like symptoms on the day you are due to attend a performance then please do not attend the theatre. Please call the Sydney Lyric Theatre Box Office on (02) 9509 3600 and we will exchange your tickets into a future performance or provide a refund if no suitable date can be found.

MAKE YOUR EVENING TRULY MEMORABLE WITH A LYRIC DELUXE PACKAGE!

When you purchase two Lyric Deluxe tickets you will receive:

Please note, you must select two Lyric Deluxe seats when purchasing a Lyric Deluxe Package as this package is designed to be shared between two people.

Aerialists, acrobats and dancers - oh my! ??There have been some incredible talents in for the PIPPIN auditions! ??

?? Your sneak peek into the PIPPIN male ensemble auditions as they take on choreography in the style of the legendary Bob Fosse. ??

Sydney audiences will have the opportunity to experience this magical, unforgettable new production - Pippin Australia. ??